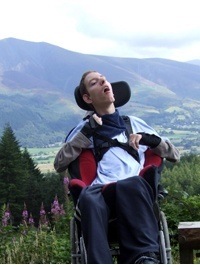 Daniel has cerebal palsy ,in 2002 he was waiting for the biggest operation off his life for scoliosis where the spine twists and contorts .He had pre op tests and the doctors asked me about any issues that worries me with him .I said yep he is always been sick,and weight gain is a problem for him , so I hope the day off his op is not one off them . This was probly the most significant thing I told them.They asked me a bit more history etc had blood tests and where done .

2 days alter the doctor called me and asked us to come in to see them ,he explained that Daniel was sinificantly anemic ,this was more normally seen in patients with gastric problems and said I am asking my college to see him urgently if only to rule possibilities out .

2 weeks later we saw a gasrto doc who took a ton off notes and asked a million questions ,he felt Daniels sickness was reflux ,bearing in mine I was a reflux virgin then .He felt a scope was urgently needed as was a transfusion which our locla ped felt was a good idea anyway .He had 2 units transfused and was like a different kid ,we then got in hospital for the scope .

The doctor came on the ward pretty soon after the scope and talked a lot and showed us a lot off pics off Daniels insides whick looked red and angry .He felt a fundo and g tube was the only option and felt it must happen soon ,he talked with the ortho team and decided to wait until after the spine op .He did thou put him on losec and gaviscon straight away ,we had the spine op in june the day before his 14 birthday ,it was rotton but very worth while indeed he was so straight and best bit no body brace ..

Then the fundo was organised for nov but Dan was to ill due to reflux which we now knew ,also jan was the same .He had the op in feb 2003 whick was the lap procedure ,the op was pretty bad and the recovery was quite slow .I must add to make matters worse Dans right hip had diclocated in november and he neded it also sorting another big op.He had the hip done in march ,he was vommiting every day by april and very ill on and off indeed .We tried every anti sickness med going .

It was a bad summer and by december he was very thin indeed .The surgeon did a barium showing the fundo to be useless ,they felt a re do was the only way foreward .He had that done in feb 2004 he had it doen open this time and they re sited his tube a lot lower down .He was really not great and retched for england big time .He had many appoitmnets etc and addmissions and was diagnosed with cyclical vommitng syndrome.we tried meds etc but none worked well until we met cyclazine ,it was like a transformation .He wasnt sick every friday for 3 days it went on for weeks and weeks ,the ped doc who put him on it also rer reffered us to a new gastro as urgent .He saw us within 5 weeks and admmited Dan there and then he had scopes, biopsies, ph run ,and meds increses .He saw us in clinic and said the reflux was under control but Daniel had barrets osophegous ,he had reflux so long it had done significant damage to him .He suggested a ongoing plan to lazer it away ,so there we are .I cannot believe it he is healthy but still doing the lazer ,we are making a good impact on the barrets tissue and off course see a great gi doc .The plan is to lazer and monitor by biopsies as long as we need to then eventually scope just once a year .Dan takes losec ,gaviscon ,cyclazine ,thick and easy for the reflux .He is also my joy my inspiration my very special gift Di.