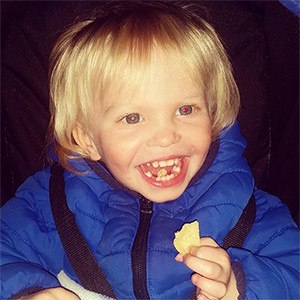 On 29th June 2013 at 2:01am, my son Jack was born weighing a tiny 5lb 3oz! I was so happy to bring him home the next day to meet his big sister Kylah. I never thought he would have a health issue, my daughter was fine, but the way our lives turned upside was unpredictable.It all started when he was 6 weeks old, uncontrollable crying, so clingy, I could not put him down, he wanted a bottle every hour, but took him 30 minutes each time to drink only 2oz of formula feed and throughout feeding he would squirm and seem uncomfortable, he made squeaking noises like he was trying to gasp for air. After a few weeks of persevering and changing his formula milk, I was backwards and forwards to gp’s and health visitors, expressing my concerns, but they just said it was colic and he will grow out of it. Oh if only that were true!

29th October 2013, my son turned 4 months old, still suffering, but this day was different. He woke up breathing really heavy, wheezing, lethargic, so I took him to a&e. After chest x-rays and horrible blood tests, they told me had bronchiolitis and he stayed on the children’s ward for 4 days on continuous oxygen and nebulisers.

He never seemed better when I bought him home, he was definitely happier, but his breathing seemed ‘noisy’. Backwards and forwards to gp’s and health visitors again. ‘Oh it’s just colic’! 29th November 2013, Jayden turned 5 months old, and again we were spending this day in a&e. After chest xrays and blood tests again, it was confirmed he had bronchiolitis again. After a couple of salbutamol and atrovent nebulisers, he seems much better and happier and was sent home on salbutamol and atrovent inhalers, and the steroid prednisolone.
The next day we were back in a&e, for the same reasons, breathing difficulty and wheezing and again we were sent home, with saline nasal drops.

1st December 2013, this was the worse month of my life! It will always haunt me. Back to a&e AGAIN! This time he was rushed to the children’s ward. Nebulisers had no effect, oxygen mask and nasal oxygen had no effect! He had IV fluids, glucose to wake him up a bit because he was so lethargic, nearly unresponsive, he was put in an oxygen block. A transparent, plastic box that covered his head, with a tube filling up the box with maximum oxygen, as his oxygen levels were dropping hour by hour! 11pm, he was rushed to theatre.
I stayed with him while he was sedated, not knowing if this would be the last time I see my baby alive.
1am on the 2nd December 2013, the doctors met me outside the hospital, with my son in an incubator, tubes down his throat, groin, hands, arms and feet, lifeless. His breathing had deteriorated so much that he need to go onto a ventilator. We travelled to a more suitable hospital in a paediatric intensive care ambulance. I felt so numb, so tired, everything felt in slow motion, the sirens of the ambulance echoing, the piercing bleeping of machines, the doctor mumbles trying to ask me questions, suddenly I remembered that I hadn’t slept or eaten in 3 days. I told myself this catastrophe was just a bizarre nightmare! How I wish it was just a nightmare!

Spending the next 6 days watching my tiny boy fight for his life, tube down his throat, ng tube down his nose for milk, IV fluids down one tube, mezopram sedation in another tube, he also needed paralysing fluids as he tried to fight against the sedation, a blood transfusion and maximum ventilation, which meant he had no natural ling function. Day by day, he would get slowly better, then dramatically worse again. I became a pro at reading the life support machine. This was living hell. Watching your helpless child fight for their life is in my opinion, the most life changing, heartbreaking and devastating moment I have ever experienced. What is wrong with my baby? Why is this happening to him?
Again after tests, it showed he was suffering from severe bronchiolitis, RSV positive and his right lung had collapsed.

8th December 2013 was the day my son was finally strong enough to be woken up and taken off the ventilator. To see him awake and to finally hold him again felt like I had given birth to him all over again! He was off all oxygen and back on bottles and able to come home on 13th December 2013, ready for Christmas! 2 weeks and only saw my daughter once! It felt incredible to be home with both my children again, happy and healthy… well for now anyway.

My son again, never seemed better. But what should I have expected after him coming off life support? Will life ever be the same again?
Christmas was lovely! It was his first ever Christmas and he was happy! This was short lived though. On 28th December 2013, he was admitted to hospital again for bronchiolitis and increased work of breathing, but this time was different, my intense fear of him going onto a ventilator again! I can’t keep doing this. I am not strong enough. He was discharged on 30th December 2013, with salbutamol and atrovent inhalers and prednisolone. This had to be the last time. Please let this be the last time!

23rd January 2014, a&e again. Increased work of breathing, wheeze, but thankfully after a few hours of salbutamol and atrovent nebulisers, he was able to come home on salbutamol and atrovent inhalers, and a dark brown steroid preventer inhaler that he had to take one puff twice a day, long term. Hopefully this will help.. NO!
2nd February 2014, a&e again and sent to the children’s ward. The doctors claimed that his recurrent increased work of breathing must be to do with me and his environment, it broke my heart to hear them potentially say that my sons poor health was my fault. Am I doing something wrong? After oxygen and nebulisers for the night, he was sent home the next day with salbutamol inhaler again and nasal drops.

Finally everything changed! He was admitted to the children’s ward again, this time was a 3 week stay! I was adamant that there was something seriously wrong with my son, so the 3rd day in, the nurses said the doctor doing the ward rounds today specialises in respiratory problems. A miracle!
All morning I prepared a speech in my head, to demand them to investigate further as to why my baby boy is suffering like this. The doctor came into our room, I cried, I begged, I pleaded for him to make my baby better, and that is exactly what he did!
He arranged for Jayden to have multiple chest x-rays which showed changes in his right middle lung, he had a sleep study, that came back normal, he had various blood tests and swabs from his nose and throat and stool. He had a barium swallow that finally gave us a diagnosis, and made everything seem so clear! He was suffering from Silent Reflux and Aspiration. He was tried on Reflux medication, 2ml of Domperidone 4 times a day, 5ml Omeprazole once a day, his steroid inhaler increased to 2 puffs twice a day, salbutamol inhaler as and when he needed it and 4mg of Montelukast granules. This seriously changed my baby. Happy and healthy and finally sent home!

J had a bronchoscopy and chest CT scan, which showed severe Silent Reflux and severe Aspiration, his little lungs were inhaling his stomach acid and milk, damaging his lungs, making breathing hard for him. He had food fat on his lungs and edema, his right lung was much worse with significant air trapping, his bronchia were small and floppy, making it hard to pass the scope down during the bronchoscopy, a scope so tiny it is used on premature babies, but almost impossible on my 9 month old.

The medication changed my sons life, he was able to tolerate solids, he had a severe development delay due to always being so poorly to learn new things, he had physiotherapy that quickly changed this. Months went past with no hospital admissions, no a&e trips, he still sometimes or frequently suffered with breathing difficulties, but I was confident enough to treat him at home with his inhalers, he soon got better every time. He had a range of different tests and investigations, including another barium swallow test, another sleep study, 2 impedance studies, blood tests, swabs, sweat test, video fleuroscopy, all showing that his reflux is getting more severe, so his medication was increased accordingly.
He had a further a&e trip and admitted to hospital in October 2014, July 2015, October 2015 and April 2016, but after oxygen and nebulisers and discharged with his usual, I felt more confident that my son will one day be healthy.

Jayden is now 2 years and 10 months old, he is officially diagnosed with Silent Reflux, Gastro Oesophageal Reflux Disease, Aspiration, Short Stature with possible genetic disorder, he suffers with frequent Glue Ear that comes and goes, affecting his hearing, caused by the Reflux travelling through the Eustation tubes, he has 2nd degree enlargement on his right tonsil and 3rd degree enlargement on his left tonsil, he has unpredictable behaviour including self harming (whacking objects over his legs or head, smacks his face, headbutts, bites his hands), he hurts people and animals, but when his tricky behaviour is at bay, he is a lively, cheeky, happy soul and a joy to be around. He is on high calorie drinks including Fortini and Calogen, due to Failure to Thrive, he is currently 86cm in height and 24lb 7oz, and fits in 12-18 month clothes.
His Omeprazole has been increased to 20ml a day, 3ml Domperidone 4 times a day, 2 puffs of preventer inhaler twice a day, Salbutamol inhaler as and when he needs it, multivitamin drops and 4mg Montelukast. He tried Azithromycin, a long term antibiotic, but this gave him extreme stomach pain.
He is due to have his 3rd impedance study, due to him refluxing 40 times in 6 hours on the previous impedance study, this will determine if Fundoplication and/or Gastrostomy is needed for him.

The Living With Reflux charity and forum have helped me at bad times with Jayden, other parents in the same situation when you feel at your lowest, finding it hard to cope, need a rant, need advice for your child, you simply ask the forum and you know there is guaranteed to be parents with a few kind words, advice and support or they are feeling the same as you, it’s like taking the weight of your shoulders.

The end of the Reflux journey is far from over for J, in fact I wouldn’t be surprised if it is something that he will always suffer from, but I feel so much more at ease and confident and hopeful that my baby can lead a happy life despite his suffering, and we will face each obstacle as they come, knowing that we have been through the worse of times, and nothing can bring us down anymore, nothing can beat my little fighter! His main consultant to this day is the doctor that arranged the tests, that happened because I begged and pleaded, so parents, you know your own child better than the doctors, if you feel that something is not right, then demand and express your concerns and don’t leave until you are satisfied with the outcome. Reflux is not just vomiting and not all children grow out of it, it can be more complex and not many people know how serious it can be. Our refluxers are fighters. My son is a fighter!