Our reflux baby experience – Seeing a children’s gastroenterologist and being prescribed the antacid Omeprazole led to a breakthrough in baby Jack’s reflux.

It’s 8pm, after a full day as a Mum of two. I’m typing this article on the lap top, sipping a glass of red wine. My two sons are curled up in their cots. Just a few nights ago, it was a different story. I was trying in vain to comfort my 5-month old baby, Jack, who was vomiting, red-faced and screaming. This scene has characterised many days and nights since the first few weeks he was born and has rendered Jack and my husband and me mentally and physically exhausted.

You’re probably thinking this comes with the territory for new parents. Crying and sickness are normal for babies. But if you have a baby with very bad reflux, the condition Jack has been diagnosed with, they take on a whole new dimension. Milk feeds – Jack has breastfed since birth – were frequent and erratic. Many – seemingly – caused Jack pain and he would arch his back and wail. And then the sickness would start, finishing up to three hours later.

Car journeys, the equivalent of a sleeping pill for most babies, made him worse. A two-hour trip turned into a six-hour epic as Jack howled with discomfort, drenching himself with vomit, and we had to keep stopping to settle him. Our two-year old started screaming too after the third hour – and we felt like joining him. Jack wouldn’t settle in his cot for more than 15 minutes without waking up and being sick. My husband and I were like a tag team.

One would eat, the other would hold him as he thrashed, and then we’d swap over. If my husband didn’t help settle Jack after night feeds, there would have been many times when I would have been greeting the new day, and our bouncing toddler, without any sleep at all. We felt guilty we were finding Jack such hard work, because we loved him so much. Above all, we were terrified there was something seriously wrong with our boy. 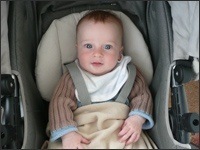 I went back and forth to the GP and health visitor. The first doctor I saw sent me away, despite hearing the whole story, saying Jack’s distress was typical because “it’s not nice being sick, is it?” I was told to give him infant Gaviscon, a powdered feed thickener and mild antacid. Yet this is difficult to administer if you are breastfeeding, as we found with our first son who had a milder form of reflux. The health visitors were supportive of Jack and me and suggested a few common reflux management methods, such as propping up his cot, but none worked. During all this, Jack was amazingly putting on weight and following his growth curve. He was responsive, and mostly happy, when examined.

Yet he was always much brighter when he was out of the house and had been riding in the pram. It was the only time he ever really got into a deep sleep. Other people commented on how well he seemed, which made me feel that I was being paranoid or exaggerating. It was my family, listening to my worry during tearful phone calls, who urged me to keep seeking a solution, even if only for the sake of our sanity. I saw another GP to get a second opinion, who listened to what I had to say – and actually seemed to care. He examined Jack closely to check there was nothing seriously wrong, consulted a paediatric gastroenterologist, and referred us to the children’s hospital. He also started Jack on an antacid drug called Ranitadine, which brought some improvement. Seeing the consultant – after a six weeks wait – proved to be the breakthrough.

She stopped the Ranitadine, which she felt may have lost its effectiveness, a common problem with this drug, apparently, and prescribed him another antacid drug called Omeprazole, which takes a week to have an effect. Days later, Jack was contentedly slurping at my breast. The vomiting reduced dramatically. He went into a deep sleep in his cot – and he stayed asleep, settling immediately after most night time feeds. He’s still not completely settled but the extremes of our experience before and after Jack taking the Omeprazole were astonishing. 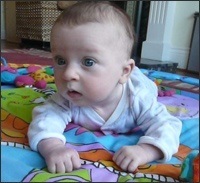 I read the accounts of several families who had babies just like ours on various reflux blogs. Many also felt desperate, and some reported they had not been taken seriously by health professionals who didn’t seem to have the experience or knowledge to deal with the condition. Perhaps the reason for this is that reflux in babies is actually very common and many grow out of it quickly. Our first son, Liam, had a milder form of the condition which had virtually gone by 12 weeks. The paediatrician told us there are varying degrees of reflux and Jack’s has indeed been many times worse than Liam’s.

It also runs in my family. My sister’s four children have all had reflux and have received medical treatment for it. My mum remembers a similar experience when I and my two sisters were babies, although she never received a diagnosis in the 1970s when you were left to get on with it. With hindsight, we wished we’d paid to see a consultant privately which would have meant a much shorter wait and an earlier solution. We’re hoping the Omeprazole will continue to work but we want Jack to be regularly monitored. Next week the paediatrician is due to review his condition, a month after our first appointment. In the meantime, I’m raising my glass to continued sweet dreams all round.