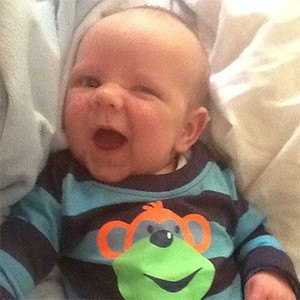 Our son was born in April 2013 and pretty much as soon as he was born I could sense there was something wrong with his feeding. I really wanted to breast feed and every time I tried I felt like he wasn’t drinking anything or didn’t like it as he would pull away. My midwife suggested to top up his feeds with some formula which he seemed to like better. He wouldn’t sleep and eventually when I learnt to swaddle that helped a lot, he seemed to want comfort all the time! If I laid him down he would cry after a few minutes, he started to arch back in some sort of pain as well which is what started to make me look into his health.

My first thought was it could be colic so I tried all the traditional remedies which did nothing, he would spit up constantly! I was using at least 2 muslins a day and felt like I was constantly feeding him, needless to say I abandoned breastfeeding as he would not take to it at all and we would just get upset trying. I had come across reflux whilst looking into colic and how to remedy it so when I exhausted all ideas for colic I decided to take him to see the Doctor and discuss reflux.

The Dr had not one clue about reflux in babies but understood the condition for adults so we kind of muddled through our appointment. We were prescribed Gaviscon and I had asked about Carobel which he googled and said it was an option after trying Gaviscon. I felt really alone after that appointment, a fully trained Dr didn’t know about it.

We tried the treatments and it did nothing, our little guy seemed to get worse by the day and all I wanted to do was cry in frustration at not being able ease his pain. Having reflux caused our son to cry all the time, I started to dread going out and would panic if on my own. I didn’t like to go further than my local shops on my own as I couldn’t juggle picking him up and pushing his buggy. I was invited by my health visitor to attend a post natal group which I did and that’s where I met a lady called Emma and her newborn Rocco. Her son had reflux as well! We didn’t stop chatting about it and it was the biggest relief finally having someone who understood what I was going through.

I started to look into reflux more and came across the LWR website which said there was a group in Lewisham, where I live! I started chatting to Gemma and took Emma along to the group with our reflux babies. I started to feel so much more happier with this support and people who actually understood. We started trying Carobel and finally the spit ups became less and he started being happier, I finally felt like I could breathe and we could enjoy each other. I then discovered I could get a formula specifically made for reflux babies which was thickened with carob bean so I bought it straight away and weaned him onto it.

Luckily this carried on working even better than adding the Carobel, he started to has less spit ups and less pain, eventually a year later he is virtually recovered and we only have the odd throw up. We were very fortunate that he took to the milk which helped him through his reflux, it caused severe constipation though which led to him being put on a laxative for a month which sorted it out. The support I found pretty much brought me back from the brink as having your baby in pain and not being able to do anything is torturous enough without having your own health team know nothing about it either. I am so glad I found a friend in Emma and the LWR support group. I don’t think any mum should feel alone, so much more support and understanding is needed in regards to this wretched condition.